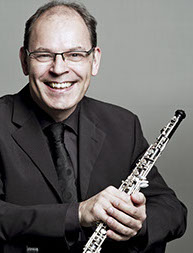 Ralf-Jörn Köster,  born in Düsseldorf, started playing the oboe at the age of 10. He won numerous prizes at the competition 'Jugend musiziert.' He went on to study with Taskin Oray at the Robert Schumann Hochschule in Düsseldorf where he completed his performance diploma. At the age of 23, still a student, he became a member of the Remscheider Symphoniker, after which he spent several years as principal oboist with the Würzburg Philharmoniker. In 2008 Ralf-Jörn became principal oboist of the Staats­philharmonie Nürnberg. He is a welcome guest in many renowned opera houses eg. Munich State Opera and the Badische Staatstheater Karlsruhe. He performs regularly with the Deutsche Kammerakademie Neuss, the Münchner Bachsolisten and the Salzburg-Chamber-Soloists, also as a soloist, both in Germany and abroad, taking part in numerous CD productions. In Kremsmünster, Austria, he teaches at the Oboe-Bassoon-Festival OFF. As well as teaching at university level, Ralf-Jörn shares his extensive knowledge in seminars including those for oboe teachers.

In 2003 Ralf-Jörn was appointed to teach at the University of Music in Würzburg.

from teaching methods to reedmaking. In 2014 he became a substitute professor at

the University of Music in Nürnberg. Since the winter semester 2016 he has continued his teaching there with his own oboe class.